“Summon your Chariot to your location.” — In-game description

The Chariot is the personal vehicle of Doviculus, summoned via the Summon Chariot guitar solo.

As the name implies, this vehicle is a motorised Chariot, with the engine and Coiling Maw taking the place of horses. 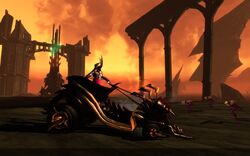 The Chariot is available to Tainted Coil players in multiplayer stage battles. Because the Chariot only appears in multiplayer, where all players can fly at great speeds, and because it cannot be upgraded or armed, it isn't particularly useful for transportation. It can still be used however, to shield the player from damage, run down enemies, or escape if affected by the Anvil of Burden.

The Player needs to install the newly unlocked "A Touch Too Much Armor" before the Coiling Maw will be available.

Add a photo to this gallery
Retrieved from "https://brutallegend.fandom.com/wiki/Chariot?oldid=26413"
Community content is available under CC-BY-SA unless otherwise noted.