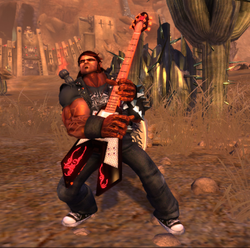 “A humble guitar back home, but here, the power of her rock seems to be amplified by the world itself.” — Tutorial

The guitar can electrocute and burn enemies for continual damage. Clementine is also capable of playing solos, which act as spells. These can do anything from summon cars and beasts to melting enemy faces.

As the game progresses, the player can unlock more abilities and even combo moves with The Separator. More combos can be unlocked through the story and by purchase in the Motor Forge, where Eddie can also buy various guitar strings that enhance different parts of Clementine's power, each with its own complimentary paint job.

Clementine's magic power cannot be used constantly for long periods of time. If it is overheated, the guitar will burn red hot. The player will have to wait for a short cooldown period before being able to use its magic again.

In the modern era, Eddie is shown tuning Clementine before Cabbage Boy's concert. The lead guitarist approaches Eddie and insincerely apologizes for smashing it the night before, laughing before realizing Eddie had fixed it "like new", and taking it to use on stage, promsing not to smash it "so much this time". During the show the guitarist climbs the set and nearly falls, dropping Clementine forcing Eddie to grab it before saving the ungrateful musician.

When first retrieved in the mission "Welcome to the Age of Metal", the player is immediately able to use the Pyro and Shocker moves. After dispatching a wave of Druids with these moves, the Earthshaker combo is automatically unlocked for the player during the same mission.

For the entirety of the campaign, Clementine is instrumental to advancing through the missions and winning stage battles.

Tutorial screen on how to use Clementine.

Clementine being wielded by a member of Kabbage Boy

The Tenacious D Guitar available with pre-ordered copies of the game.

A member of Kabbage Boy holding on for dear life with Clementine.

Eddie storing Clementine on his back (along with The Separator).

Add a photo to this gallery
Retrieved from "https://brutallegend.fandom.com/wiki/Clementine?oldid=26379"
Community content is available under CC-BY-SA unless otherwise noted.