View source
watch 01:36
We're Getting Mutants in the MCU - The Loop
Do you like this video?
Play Sound
“Come and see me when you grow a pair as big as your mother's.” — Doviculus

Emperor Doviculus is the main antagonist of Brütal Legend. Doviculus is the leader of the Tainted Coil faction, and is the avatar the player adopts when playing as that faction in multiplayer. He has two weapons: the Double Staff Axe and the Hydra, a quadruple-necked electric guitar.

Before Doviculus's reign, Succoria ruled the Tainted Coil, and Doviculus was a demon under her command (his exact rank during Succoria's rule is unspecified, though it is assumed that he was high in rank). When Succoria left for the future, Doviculus seized his chance and took the demonic throne for his own, replacing Succoria as ruler of the demons. Even so, he stated that when she did not return, he mourned her.

“The Season of Pain is upon us.” — Doviculus

After Eddie first arrives in the Age of Metal, Doviculus goes to the Temple of Ormagöden, and finds what he believes is Succoria's scent on the dagger that Ophelia left behind. Believing that his old mistress had returned, Doviculus plots to take her out. Convinced she had sided with the humans, the Emperor moves to stomp out the human rebellion. In the course of stopping the rebellion, Doviculus murders Lars, leader of Ironheade, who had jumped up to defend the honour of his subjects.

During the confrontation between Eddie Riggs and Doviculus, Eddie states that Doviculus had referred to Ophelia as Succoria - to which Doviculus laughs. He explains that Succoria was the most fierce and bloodthirsty warrior of the Tainted Coil, and that Eddie is in fact the person whom he had mistakenly assumed to be Succoria. Doviculus explains that he had smelled her blood, and indeed smelled it at that moment, for her blood flows through Eddie, her son.

In reaction to Eddie's disbelief, Doviculus points out that Eddie is wearing her shirt (the black shirt he wears says "Succoria" on it in very twisted letters) and is wielding her axe, the Separator. At that moment, Doviculus kills Drowned Ophelia by tearing out her heart, which he places in his chest next to his own heart. He then summons a huge monster made of the cathedrals surrounding the Sea of Black Tears, and an apocalyptic battle begins between the dreaded demons of the Tainted Coil and the fiery force of Ironheade.

When Eddie destroys one of the demon heads in the battle, Doviculus comments that he's glad Succoria refused to mate with him because now he knew he wasn't Eddie's father. "There aren't many who can say that," he says, hinting at his own indiscriminate nature. This could also be construed as a jab to incite Eddie, by suggesting that his mother was extremely promiscuous.

The Tainted Coil's forces are not able to stop Ironheade, and Eddie confronts Doviculus. After a fierce battle, Eddie lops off Doviculus's head and tears out his heart, killing the demon Emperor.

Doviculus is cruel, sadistic, and cunning. He does not hesitate to play his enemies against each other or wipe out a potentially dangerous foe when the chance is presented to him (as shown with Lars). The emperor of the Tainted Coil is amoral like the vast majority of demons on every front. He is lustful to the point where he is sexually attracted to his own children (though this may be normal behaviour in the Coil's society).

He is extremely proud, thinking of humans as pitiful creatures that should be treated as beasts. He is confident in his abilities, left in disbelief if he is nearing defeat. He treats his subjects with a mix of affection and expendability, more like valuable tools than his children, peers, and/or lovers. Doviculus, despite his demonic vileness, is one of, if not the most eloquent speaker in the game, showing his position in the Coil's hierarchy.

Doviculus was a terrifying warrior even before the secrets of the Titans were revealed. As proof of this, he is greatly feared by human and demon alike. He has undying loyalty and command over the legions of the Tainted Coil, having access to their full arsenal. His military intellect is impressive; his ability to manipulate others for his own gain even more so. He wields his staff axe with deadly speed and proficiency despite its great weight. He possesses a great deal of strength, having impaled with his spear, picked up, and thrown Lars Halford with no apparent effort.

His only apparent weakness is a lack of eyesight. He seems to have no eyes, and his head is almost entirely bound in leather. He was unable to see (or simply ignored) Eddie and the others whilst they hid in a fountain at Lionwhyte's Pleasure Dome, and was unable to tell that the scent of Succoria's blood came from within a human until much later in the story. He apparently compensates for his lack of vision with a powerful sense of smell, and has no troubles on the field of battle.

Upon learning the secrets of the Titans, the Emperor was able to harness the power of the Sea by stealing Ophelia's heart, calling forth a behemothic beast from the Sea of Black Tears using his Hydra guitar. With metal, he's also capable of calling plaguing diseases, summon his minions, and chain powerful foes to the ground temporarily. 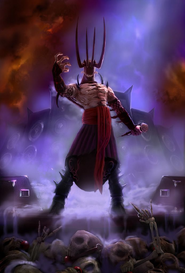 Promotional artwork made of Doviculus 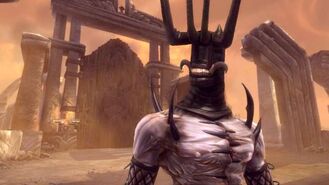 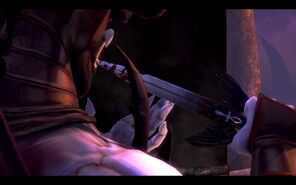 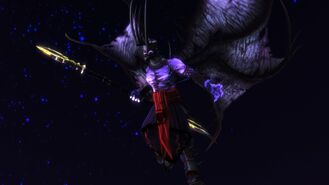 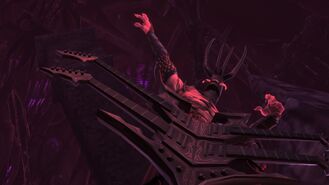 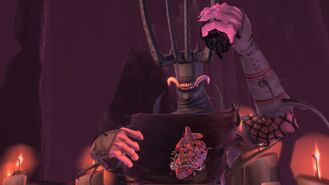