View source
watch 01:36
We're Getting Mutants in the MCU - The Loop
Do you like this video?
Play Sound
“And I began to use all that stuff you taught me, Eddie, and you know, you taught me so much. You taught me about trust, and loyalty, and betrayal... And you also taught me the power of music.” — Drowned Ophelia

Drowned Ophelia is the leader of the Drowning Doom, and the avatar the player adopts when playing as that faction in multiplayer. She has two weapons: her bare hands (which have been augmented by the dark powers of the Sea) and Six-Stringed Sorrow, her guitar.

“She has merchandise.” — Eddie Riggs

Drowned Ophelia is the dark form of Ophelia that emerged from the Sea of Black Tears. Spawned from her sense of betrayal at the hands of Eddie Riggs, this Ophelia spends the next three months using everything she'd learned from the roadie to form her own army consisting of Tear Drinkers, which she then names the Drowning Doom.

Ophelia then sends a battalion of the Drowning Doom to attack Ironheade's encampment at Death's Clutch. After those forces are routed thanks to the intervention of the Fire Barons, Eddie sees Ophelia's falling raven crest on the shirt of a slain Grave Digger and realizes she is in command of the Doom. When Eddie subsequently learns that Doviculus has re-opened the gateway to the Sea of Black Tears, he heads for the Sea with Ironheade, intending to defeat Ophelia.

However, after Eddie uses Relic Raiser to raise a shattered bridge that would allow them to continue towards the Sea of Black Tears, Ophelia confronts him for the first time. She then proceeds to destroy the bridge with her own Guitar Solo.

Ironheade eventually manages to repair the bridge and continues towards the Sea. Ophelia chooses to confront them again when they make a stop in the Dry Ice Mines. When asked what happened to her, one of Ophelia's Organists appears and plays a song that reveals how she was transformed via Flashback.

With Eddie temporarily distracted, Ophelia takes the opportunity to set up her own Megastage to engage Ironheade's forces. Eddie snaps out of his trance though, and fights back with his forces, defeating the Doom despite Ophelia's direct interventions during the battle.

“Through the woods a girl came sadly. Something broken in her chest. She had dared to love another. Alas, no better than the rest.
Up my path the girl came gladly. Something opened up my doors. I longed to stop her bleeding heart. And so I called her to my shores.
Those you trust will hurt you badly. Something now I'm sure you see. So drown your tears in me, my dear. As you drown, my dear, in me.” — Drowned Ophelia

Ophelia retreats to regroup her forces, next confronting Eddie when they attempt to move the Tour Bus the remaining distance to the Sea, where she uses a Dirgible in support of her Reapers that are attacking the bus. When that fails, she masses a squad of her units at the tunnel to the Sea, creating a roadblock to force the bus to stop. Eddie and Ironheade's units manage to destroy her forces though, forcing her to fall back to the Sea.

After Ironheade makes their encampment on one side of a bridge spanning the Sea, they soon launch their final attack on Ophelia. Cornered, she sets up another Megastage on her side of the bridge and deploys her remaining forces against them, including the Dirgible and a massive Tree Back. However, Ironheade is able to defeat them and bring down her Megastage, leaving her at Eddie's mercy.

Eddie had earlier learned from the Zaulia that his father Riggnarok led the Black Tear Rebellion, in which Ophelia's parents fought, and confronting her, asks Ophelia if that was the secret she couldn't tell him. Ophelia denies it, revealing that Eddie's father actually travelled through time with the demon Emperor. Eddie insists that his father had defeated the Emperor, because "there aren't any demonic overlords in the future. Except", Eddie amends, "in record companies", and that since Doviculus was here in the past, he must have fled back to the Age of Metal. Ophelia laughs, telling him that the Emperor back then was not Doviculus, but someone else; when Eddie asks who it was, Ophelia flees into the nearby cathedral.

Eddie follows her, asking how they will end this. When Ophelia states that one of them must die, Eddie, agrees, nominating the one who sold them all out to the demons. Ophelia agrees, feeling that Eddie is the traitor.

Just as they are ready to attack each other, Doviculus appears. Eddie then calls Ophelia "Succoria", thinking that it was her real name, but Ophelia merely looks confused. Doviculus laughs at Eddie and tells him the truth behind the name Succoria: it was the name of the former Emperor of the Demons, whom Doviculus revealed had travelled to the future to unlock the lost secrets of the Titans, along with several human slaves. These slaves included a disguised Riggnarok, with whom Succoria eventually fell in love, despite his original plan to kill her. The pair then had a child - Eddie. Before any further development of this subject occurs however, Doviculus rips out Drowned Ophelia's heart, prompting Eddie to fight the powerful demon Emperor.

After defeating Doviculus in a Stage Battle and then in personal combat, Eddie pulls Ophelia's black heart out of the demon's chest cavity, and it melts in his hands, revealing the necklace he gave her. He dives into the black water, soon finding the real Ophelia in stasis at the bottom of the Sea, revealing that the one he had been fighting was nothing more than a manifestation of the Sea's dark powers.

In this form, Ophelia has a drastically different appearance to her previous look. Her hair is black and she she wears thorn-like barrettes, while her eyes are tinted purple and accentuated with eye-shadow that imitates tears. Most notable is her skin, which is blue, simulating asphyxiation, and the Black Tears themselves that form her clothing. These are a black torn-up dress that sublimates at the bottom, gloves and a fan-like collar of Tear tendrils at the back of her head.

The Black Tears also allow her to sprout giant black raven wings at will, allowing her to fly. When she chooses to attack, she can strike at enemies using the Tears, forming them into a melee weapon. Finally, the Black Tears allow her to manifest the Six-Stringed Sorrow guitar whenever she wishes to play a solo.

Ophelia's personality is much darker than before, and she behaves like a femme fatale that remarks on death, misery and emotional injuries. This is most evident when she is dealing with Eddie, as the idea that he has betrayed her trust is central to her character. She frequently mocks him for his lack of understanding. 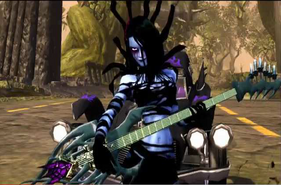 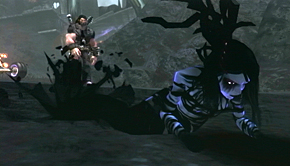 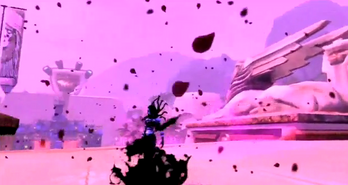 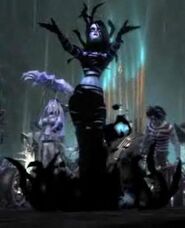 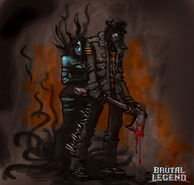 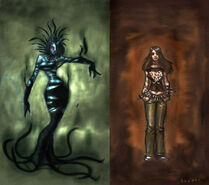 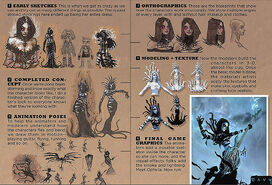 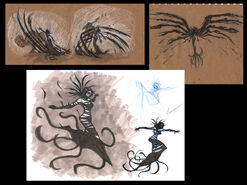 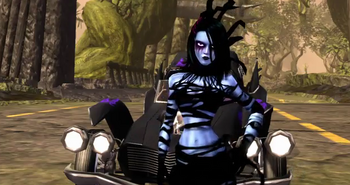