“That was the sound of the Blood Skank, the most cowardly of all skanks!” — Fletus

Fletus is a demon who gives the player the racing secondary missions and serves as the opponent during those missions.

He is a demon, but he stresses that he does not associate himself with the Tainted Coil (claiming he's 'too ugly' for them). Although he hates Eddie for constantly making fun of the Squealer's speed, the ways of his people force him to award Eddie Riggs with Triple Nitro if you complete all the racing side missions. The ways of his people also command him to take "revenge" on Eddie, which prompts Eddie to make one last remark on Fletus' driving speed. 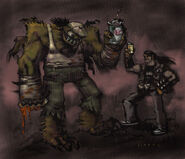 Add a photo to this gallery

Retrieved from "https://brutallegend.fandom.com/wiki/Fletus?oldid=26777"
Community content is available under CC-BY-SA unless otherwise noted.