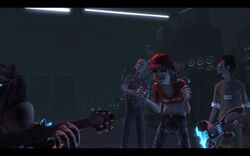 “I can fix anything... except that.” — Eddie Riggs

Kabbage Boy is the worst metal band of all time, and the band that employs Eddie Riggs as a roadie during the Age of Modern Man.

The entire band, apart from the bassist, show no respect towards Eddie or the classic Metal they supposedly  descend from; they only accept the stage set that Eddie built in an "ironic, retro sort of way".

During the intro, they play their hit single, "Girlfriend", which mixes metal with pop lyrics and rapping, much to Eddie's dismay. This prompts Eddie to say, "I can fix anything... except that." 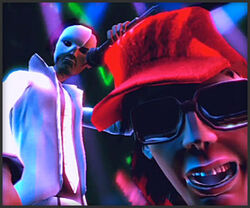 The lead guitarist smashed Clementine at the last performance, and is shocked that Eddie was able to repair it. After he sarcastically remarks that he'll try not to smash it up 'too much' this time, the bassist tells him not to antagonize Eddie, as Eddie scares him. The lead singer, distracted by his HipTop (and texts), asks Eddie if he can get rid of the current stage and build them something to better appeal to their target audience, the 'tween demographic'. He backs down slightly upon noticing Eddie's disgruntled movement, but comments that Eddie will have to catch up and join the modern world. More than likely, he is also slightly afraid of Eddie, but is more concerned with the band and his appearance.

During their performance, the guitarist attempts to show off but instead ends up dangling over a drop to his death on the top of the stage set. Begrudgingly, but without much hesitation, Eddie saves the guitarist by catching him - but at the cost of his own life. The guitarist escaped, but Eddie was crushed underneath a heap of twisted metal, that, more than likely, the guitarist's idiotic antics caused to loosen and fall from the stage set.

When Eddie's magical belt buckle, really an idol of the Eternal Fire Beast Ormagöden, tasted his blood, it summoned the spirit of the real Ormagöden. The Bassist got off the stage in time, before a wall of flames rose and completely encircled the stage, summoned by Ormagöden, who promptly turned his terrible scream upon most of the band, and the remainder of Kabbage Boy were all killed when it unleashed its metal fury, blowing their heads off with its pure Metal power. (If the Gore option is turned off, the three band members simply fall over instead.) He then crushes the unworthy drummer beneath his mighty fist and cleared the drums out of the way to make room for Eddie's body.

Despite Eddie's distaste for the group, "Girlfriend" is one of the songs that can be unlocked for the Mouth of Metal by raising one of the Buried Metal relics. Further mocking the band and song's dignity, the Mouth of Metal classifies this song's genre as "S.W.O.A.T.M.R.M.", or Second Wave of American Tween Melodic Rap Metalcore. 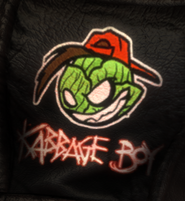 Kabbage Boy Logo
Add a photo to this gallery
Retrieved from "https://brutallegend.fandom.com/wiki/Kabbage_Boy?oldid=26704"
Community content is available under CC-BY-SA unless otherwise noted.