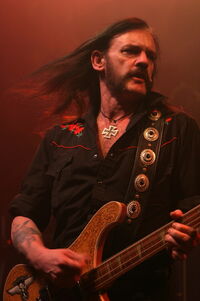 “Everything louder than everyone else.” — Lemmy Kilmister

Ian Fraser "Lemmy" Kilmister (December 24, 1945 - December 28, 2015) was an English heavy metal musician. He was best known as the bassist, vocalist, songwriter, and founding and constant member of the rock band Motörhead.

His character in Brütal Legend, Kill Master, is largely based on himself, sharing a similar appearance and name. In the game, Kill Master is also a bassist, and his Thunderhog plays the guitar riff for "Marching Off To War".

Lemmy died on December 28, 2015, from an "extremely aggressive cancer", having been diagnosed with it two days prior to his death. 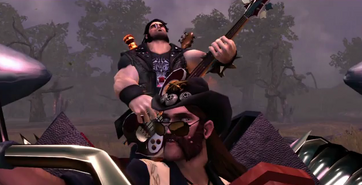 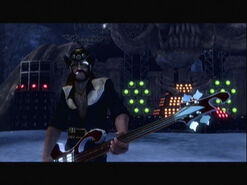 Add a photo to this gallery
Retrieved from "https://brutallegend.fandom.com/wiki/Lemmy?oldid=26093"
Community content is available under CC-BY-SA unless otherwise noted.