View source
watch 01:25
Jurassic World: Dominion Dominates Fandom Wikis - The Loop
Do you like this video?
Play Sound
“He's amoral, delusional, ruthless, sadistic... and he won't stop 'till we're all his slaves.” — Ophelia

Lionwhyte is the leader and avatar of the Hair Metal Militia. He oversees the continued slavery of humanity under Emperor Doviculus and the Tainted Coil.

“I try to show Emperor Doviculus that we humans aren't all dirty brutish animals. I show him that we can be refined, we can be beautiful, and that we can be profitable. I do it to protect you people from Doviculus, I am the only thing standing between you and him. And what do you give me in return? Grief!” — General Lionwhyte

Lionwhyte is first mentioned by Lars Halford as the person responsible for humanity's continued enslavement, sending young men to toil in the Crushing Pit mines and keeping the young women as dancers in his Pleasure Tower.

He makes his first actual appearance after Eddie Riggs has marshalled together several factions of humans into the Ironheade rebel army under the leadership of Lars. Lionwhyte questions Lars on poaching his 'employees' and then sends several Hair Metal Militia battlegroups in an attempt to wipe out the resistance movement. Ironheade repels the attacks however, and Lionwhyte retreats, warning them that they will regret what they have started.

When Ironheade reaches the fortified walls of Battersmith, Lionwhyte leads another force of Militia troops against them. Despite the cover-fire provided by a Bouncer mortar cannonier, Ironheade is successful in breaching the gates of Battersmith, forcing Lionwhyte and the Militia to fall back to the Pleasure Tower, but not before he fires the Bouncers for failing to hold the line.

After seeing that the Bouncers have summarily joined Ironheade, Lionwhyte attempts to sway them back to the Militia with offers of 'slimming new uniforms'. This is partially successful, as evidenced by his new Glitter Fist troops, but a large number of Bouncers choose to remain with Ironheade instead.

Lionwhyte makes his last stand at the Pleasure Dome when Ironheade manages to bypass The Cleave of the Impaler and launches an assault on his Pleasure Tower. Although the Pleasure Tower is protected by two Impaler Towers, it is not enough to stop Ironheade's advance, and the rebels finally bring down the Pleasure Tower, scattering the remaining Militia.

Angry at the lack of discipline shown by his troops, Lionwhyte attempts to rally them to no avail. When the crumbling Pleasure Tower dislodges a mirror held by a giant statue of himself, Lionwhyte tries to use his voice to knock it away; instead, the mirror shatters into several large shards. Lionwhyte's last expression is of disbelief before the shards impale him, bringing an end to the Hair Metal Militia's control of humanity.

Lionwhyte is very haughty. He sees himself as genuinely righteous, and the only person stopping Doviculus from slaughtering the remaining humans. He believes he can show the Tainted Coil the beauty of humanity. He tends to ramble on and give lots of speeches.

Like the Tainted Coil, Lionwhyte does not understand the purpose of everything excavated from the Crushing Pit - at least not until Ironheade begins making vehicles for their army. Prior to that, he cared only for collecting leather and vinyl from unearthed car seats for his demon overlords, or rear and side-view mirrors to decorate his Pleasure Dome.

Lars seems to hold a personal grudge against Lionwhyte, probably because of Lionwhyte selling out humanity for his own benefit. Lionwhyte even made a banner that reads, "Welcome, Dirtbags" and shows Lars as a potbelly. Ophelia doesn't have much respect for him either, as she refers to him at one point as "General Poodlehair", telling him she would shove a sharp stripper pole in his ass and "wave you around like an old flag." Lita Halford also shares a hatred of Lionwhyte, and constantly trains with her halberd on a Lionwhyte dummy.

“Well, some sort of bath is definitely in order.”
— Lionwhyte after Eddie Riggs says their upcoming battle will be a bloodbath

“Don't worry, this won't take long. I know how to handle petty labor disputes.”
— Lionwhyte after Lars Halford tells him he wants to get the battle over with

“Oh bravo! Goody! Someone's putting on a puppet show.”
— Lionwhyte when Ironheade sets up their stage at the Pleasure Dome.

“I should've known better than to hire guards who HANDS are bigger than their BRAINS. You're all fired, every fat worthless one of you!"”
— Lionwhyte after the bouncers fail to defend the gate to the Cleave of the Impaler

“Shouldn't you be digging a ditch somewhere?”
— Lionwhyte 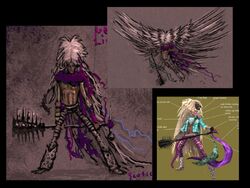 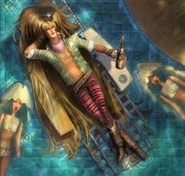