View source
watch 01:36
We're Getting Mutants in the MCU - The Loop
Do you like this video?
Play Sound
“I wasn't riding them. I was holding on for my life. There's no way to really ride these things.” — Lita Halford
“Not true, the Zaulia do it all the time.” — The Baron

The Metal Beast is an Ironheade short-range infantry unit that specializes in destroying infantry.

“Tamed only by the gentle touch of the Zaulia, Metal Beasts are a vicious foe in battle against infantry.” — Tour Book

The only people who can tame Metal Beasts are the Zaulia, a tribe of warrior women living in the Temple of the Zaulia. Wild Metal Beasts are found in the Jungle and Swamp regions of the Brütal Land, while those ridden by the Zaulia can be found accompanying Ironheade squads in the same areas and in the ruins surrounding the Sea of Black Tears.

The Metal Beasts play a major role during the mission "A Number Of The Beasts", in which Eddie Riggs concocts a plan to enlist them into Ironheade. With the help of Lita Halford and The Baron, he captures a few Metal Beasts, but before he can figure out how to tame them, the group is surrounded by the Zaulia, warrior-women who are the companions and protectors of the beasts. After revealing that he is the son of Riggnarok, Rima and her beasts join the cause.

Large short-range infantry, melee infantry-killer. These animals can breathe fire over a short distance, scorching any enemies in the area, though this does little to no damage to vehicles like the Brood.

Metal Beasts are an alternative to Fire Barons in terms of the player's anti-infantry arsenal. They are most effective against bunched-up infantry, as their fire breath can hit more than one enemy standing in front of them. As infantry units, they can also be healed by Thunderhogs between skirmishes.

“Grab a hunk of hair and hang on, hosing enemies down with the Beast's pitiless breath.” — Instruction Manual

Ridable infantry. Eddie can Double Team with the Metal Beast, after which he can aim and fire the Beast's potent breath weapon.

Like the regular fire breath, this attack can hit more than one enemy if they are inside the flame cone. Eddie can perform this double team with both wild Metal Beasts wandering the jungle (after the Zaulia join Ironheade) and Metal Beasts tamed and ridden by the Zaulia.

Eddie Riggs and The Baron being chased by a Metal Beast in A Number of the Beasts.

Several Metal Beast breathing fire onto their enemies in the multiplayer tutorial video. 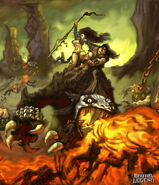 Double Teaming with a Metal Beast is required to unlock the following Achievement/Trophy: