View source
watch 01:25
Jurassic World: Dominion Dominates Fandom Wikis - The Loop
Do you like this video?
Play Sound
“Because my parents fought in the Black Tear Rebellion. It was a long time ago, but now none of them will ever really trust me. No matter how much I do for our cause. Now I've told you. Now you won't trust me either.” — Ophelia

Disguised as a Druid, Ophelia infiltrates the Temple of Ormagöden in search of the Separator, a double-edged axe with tremendous strength. However, Eddie Riggs retrieves it first, even attacking her whilst she was still in her disguise. After realising they were on the same side, the two decide to work together to escape. While the two were fighting through the enemy forces, Ophelia witnessed Eddie's skill with his guitar, Clementine, as he used it to summon car parts in order to build a hot rod called the Deuce, though Eddie initially referred to it as the "Druid Plow".

The two escape the Temple and headed for Bladehenge, where Ophelia introduces Eddie to her allies in the rebellion, the two siblings, Lars and Lita Halford. Ophelia, Lars, and Lita have some time to get to know Eddie, like how he was summoned from another world by Ormagöden as either the destroyer, or the liberator of humanity. Despite the mysterious reason for Eddie's arrival, Lars trusts him enough to have him lead the rebellion, but Eddie refuses, saying that Lars is the real leader, and he would rather follow him as what they need is someone who can put together and organize what is needed. The rebels need an army, so Eddie decides to look for some more people to join them. Ophelia wanted to free the women from the pleasure dome of General Lionwhyte, the man chosen by the demonic Emperor Doviculus to control the human slaves. Lars forbids her from going, saying that she "almost got impaled last time". Instead, Eddie sets off for the mines to free the men.

Eddie leaves, but not before promising Ophelia that after he finds the new recruits, he'll use them to save the women. However, Ophelia already had a plan. She goes alone to Lionwhyte's Pleasure Palace and frees the women, with help from the stealthy Roadies. She tries to arm the women she saved from Lionwhyte's Pleasure Palace by harvesting the bodies of Razorfire Boars, whose carcasses can be easily transformed into guns, but was gravely injured in the process.

Meanwhile, Eddie rescues the Headbangers and names the rebellion Ironheade. After this he swiftly returns with the new recruits to Bladehenge but is startled by Ophelia's condition as she arrives to the camp, bloodied and injured. She is taken by Lars to see the Kill Master, a man with a unique skill to heal the wounded through the magic of Bass. The Kill Master is willing to heal Ophelia but the wounds are so severe that he needs stronger strings from the Metal Queen's lair. Lars offers to go and gather the string, but his sister Lita advises him to just let Ophelia go, in part due to her own distrust of the woman.

This distrust is borne from the knowledge that Ophelia's parents were members of the ill-fated Black Tear Rebellion, a group of Humans who fought for much the same goals as Ironheade, only to go insane and fight with other humans after drinking the dark waters of the Sea of Black Tears. Despite this history, Lars trusts Ophelia completely, as it was her parents who were Tear Drinkers and not her. Whilst he's arguing with Lita, Eddie ventures to the Spider Lair to gather the bass strings needed for the Kill Master. After Eddie returns with the strings, the Kill Master performs his healing tune and restores Ophelia, who believes Lars saved her. Eddie goes along with this assumption, following his roadie instincts to support someone else.

“Lionwhyte will try to sweet talk you. Shoot him in the face.” — Ophelia

Ophelia then guides Eddie to meet the women she saved, who actually want to join Ironheade in retaliation against Lionwhyte. To help Ophelia and the girls, Eddie herds a bunch of Razorfire Boars toward her so she can tear the carcasses out before passing them on to the other women. Freshly armed, the new soldiers are dubbed Razor Girls.

Later on, Ophelia and the rest of Ironheade come under attack from General Lionwhyte and his followers. During the fight, Ophelia notices Eddie doubled over in pain and grabbing his back. At first it seems like nothing was there, so Eddie decided to ignore it, saying that he'd feel better after he killed some guys. Ironheade wins the battle, and they begin their tour.

Ophelia rides with Mangus and the other members of Ironheade during the ride to Battersmith, where they engage with Hair Metal Militia units. Eddie's back pain flares up again and suddenly she watches Eddie's skin change, his growth of wings, and his burning eyes. Ophelia then remembers that the Druids at Ormagöden's Temple are known for dousing their swords in a demonic poison, which has apparently transformed Eddie. Eddie uses his newfound wings to lead Ironheade to "Brütal Victory".

Just outside the Cleave of the Impaler, Ophelia introduces Eddie, Lars, and the rest of Ironheade to the ones who helped her save the women, the Roadies.

Before the confrontation with Lionwhyte, the Roadies need to be armed. The group heads to the Screaming Wall to gather the amps necessary for the Roadies. Ophelia, with the aid of some Headbangers and the newly recruited Bouncers, they reach the wall after defeating waves of Hair Metal Militia soldiers.

After returning to the top of the mountain path, Eddie teases Ophelia, saying it's obvious that Ophelia loves Lars. She began listing Lars's likeable qualities, but before she gets very far, Eddie kisses her, and the two make out as the Screaming Wall blasts behind them. Ophelia then finishes with how she thinks of Lars as a brother returns Eddie's feelings.

Eddie returns to the Cleave, now ready to infiltrate it and demolish its defences. With all the Impaler Towers destroyed, Ophelia tells Eddie about her parents after Lita makes a snide comment about her. Eddie assures Ophelia that he trusts her and as proof of, gives her the only thing he had of his mother's: a shark-tooth necklace.

Ironheade enters the Pleasure Palace and begin an assault on the Tower itself. Once again, Ophelia assists Eddie in this stage battle. In the end, they are victorious when Lionwhyte's base is destroyed and the General himself is crushed by giant broken mirror pieces. Afterward, Lars announces Ironheade would continue to fight the demonic Tainted Coil, their true enemy.

Suddenly, Emperor Doviculus appears and Ironheade hides to avoid being seen. Doviculus then proceeds to talk about a woman named Succoria, a demon sent to spy on humanity. Before Doviculus can continue insulting humanity, Lars steppes forward and boldly faces the emperor. Doviculus then mortally wounds Lars with ease using his Double Staff Axe. As the others rush to his side, he summons several Bleeding Deaths to destroy the tower and the rebellion all at once. Ironheade retreats while the Bleeding Death destroy Lionwhyte's Pleasure Dome.

After escaping the destruction of the Pleasure Tower, Lita stands in their way and warns Eddie that Ophelia is a traitor, the one that Doviculus was talking about. Eddie doesn't believe her and decides to speak with Ophelia alone to see for himself. Ophelia tries to tell him the truth, however she accidentally lets slip something about Eddie's parents. When Eddie questions her further, she refuses to tell him, insisting it was for his sake.

Eddie begins to distrust her, due to what he sees as holding back information. Ophelia is heartbroken; she had understood that most people wouldn't trust her. However, Eddie had said he would and she had even went so far as to allow herself to love him. She tossed Eddie's mother's necklace at his back as he left but he didn't pick it up.

Three months would pass before their next encounter. Abandoned and heartbroken by Eddie, Ophelia heads for the Sea of Black Tears. The Sea calles out to her sorrow and Ophelia throws herself into the Sea. Although she seems to change her mind at the last second, a strange black force from below draggs her under. Soon after, a dark doppelganger rises from the sea. The new Drowned Ophelia gathered an army, the Drowning Doom, to destroy Ironheade.

After a long battle with the Tainted Coil, Eddie defeats Doviculus with a swift slice from his axe, decapitating him. Eddie then opens Doviculus' chest and retrieves Ophelia's black heart, which melts away, leaving Eddie's shark-tooth necklace and making him realize that the Drowned Ophelia who had lead the Drowning Doom wasn't the real one.

Eddie promptly dives into the Sea of Black Tears to save the real Ophelia. He finds her body lying peacefully on a large rock and begins to bring her to the surface, when the same dark force that pulled Ophelia down grabs him by the ankles and pulls him under, only to be saved as Ophelia grabs his stage pass and pulls him up. The two resurface and, in mimicry of a dream Eddie had moments before his last fight with the Drowning Doom, the two kiss.

A few days later, the human race celebrates Ironheade's victory over the Tainted Coil. Lita speaks about how Lars could see the good in people's hearts, finally realizing her own mistake in calling Ophelia a traitor and in not trusting her. Whilst watching the celebration from afar, Ophelia sees Eddie in the Deuce, driving across the land to perform a few errands and sheds a single black tear. }} 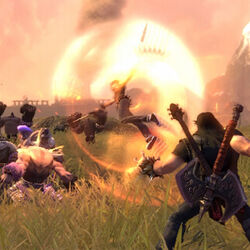 While she is allied with Ironheade, Eddie can pick up Ophelia and hurl her at enemies, her blades twirling and dismembering anything that gets in her way.