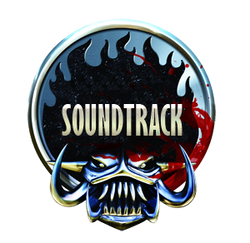 Brütal Legend features an original soundtrack with 20 songs as well as a set of 107 heavy metal songs that can be unlocked and played in-game. 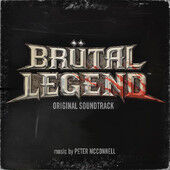 The original soundtrack for Brütal Legend consists of 20 tracks that are used throughout the game in the Brütal Campaign. The songs were composed by Tim Schafer's long term collaborator Peter McConnell, who also did the soundtracks for his previous games Grim Fandango and Psychonauts. He arranged orchestral pieces inspired by heavy metal to help tie in with the licensed soundtrack in the game. It is available on Vinyl, CD or MP3 album.

It was available to be bought from: Double Fine Amazon UK, Amazon US, eMusic, and also iTunes but it is no longer available. The original soundtrack of 20 songs is available from Steam still as of October 2021.

This is the complete list of all 20 songs. Each column is sortable by clicking the icon next to Order, Song or Length.

In addition to the original soundtrack, the player can unlock 107 heavy metal songs by dozens of artists to play in-game.

After unlocking the first Motor Forge, the Guardian of Metal grants the player Mouth of Metal, which plays any unlocked songs whilst driving in the Deuce. Songs in single player are unlocked in one of two ways: completing missions and raising Buried Metal with the Relic Raiser guitar solo. In multiplayer stage battles, songs according to a faction's allegiance will play. The song currently playing from the Megastage can be changed by double teaming with it.

The songs heard in the main menu are "The Hellion/Electric Eye" by Judas Priest, "YRO" by Racer X, "When Night Falls" by Iced Earth, "Am I Evil" by Diamond Head, "For the Glory of.../More Than Meets the Eye" by Testament, and "Symptom of the Universe" by Black Sabbath. The song heard in the credits is "Never Say Die" by Black Sabbath.

This is the complete list of all 107 songs. Each column is sortable by clicking the icon next to Song, Artist, Genre, or Allegiance.