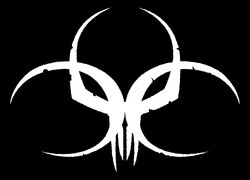 “From the oceans of blood came new life, the worst of which was the Tainted Coil. With the twisted forms of the First Ones, but the angry power of Ormagöden, they were hated, feared, and almost exterminated.” — The Narrator

This faction's chief advantages in stage battles are the Hierarchy units, which are capable of spawning other units directly onto the battlefield. This allows the player to create a large number of units with differing strengths wherever they are needed. The Hair Metal Militia, led by General Lionwhyte, works under the Tainted Coil as an elite unit of sorts, but is not usable in Multiplayer.

The first of the Tainted Coil emerged from the seas created from the blood of Ormagöden, retaining his anger and the vile appearance of the First Ones. They would have been wiped out if it weren't for the Titans keeping them as pets, who gave them restrictive S&M leather outfits to help them resemble their masters.

After their masters ascended to the heavens to become the Metal Gods, the Coil searched the world for some remnants of them, and through magic, created Humans through worship of a Titan's toenail. Rather than loving their new creations, the Coil saw their small size as an insult, and immediately grew to hate them, and quickly enslaved them.

In a bid to reclaim the lost secrets of the Titans, The Demon Emperor Succoria traveled forward in time using an idol of Ormagöden. She took with her a small group of slaves, including one murderous stowaway. When she failed to return, Doviculus became the new Emperor of the Tainted Coil.

Soon after the advent of Eddie Riggs, the rebellion against the Tainted Coil starts proper, with the formation of the Ironheade faction. The Coil does not often oppose Ironheade directly; Ironheade must first defeat the Hair Metal Militia. Its leader, General Lionwhyte is a subordinate to Doviculus. After Lionwhyte is defeated, Doviculus murders Lars Halford, and summons several Bleeding Deaths to destroy the Pleasure Tower.

Sometime after Ironheade's escape, Doviculus reopens the Sea of Black Tears, which then attracts Ophelia. After diving into it's black depths, a doppelganger, Drowned Ophelia, arises and creates an army to destroy Ironheade.

After Ironheade defeats the Drowning Doom. Doviculus meets Eddie in the cathedral, where he murders the Drowned Ophelia and summons the Black Tear Monster. A battle breaks out between the two factions, ending with Doviculus' decapitation. Afterward, Tainted Coil units are seen paroling the Western Continent.

“The wizards of gore, led by scum of the earth Doviculus. The Coil's stage only produces hierarchy units-Battle Nuns, Warfathers, and Overblessers. Doviculus communes with them to create new units anywhere on the battlefield.” — Instruction Manual

Hierarchy units form the upper echelon of the Tainted Coil that spawn from the Megastage.

Minion units are spawned by double teaming with Hierarchy Units.

Tainted Coil patrols will first start to appear after the mission "Doom's Dawn" is completed. The patrols will be larger in number and will contain higher level units until the Brütal Campaign is complete. They are encountered exclusively on the Western Continent, replacing the Hair Metal Militia patrols from before. 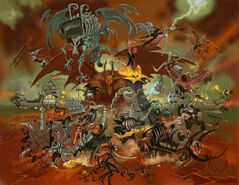 Concept art of the Tainted Coil. 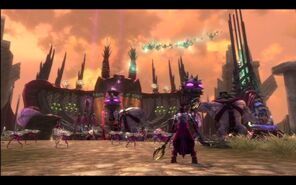 The Tainted Coil faction, as seen in the multiplayer tutorial video.