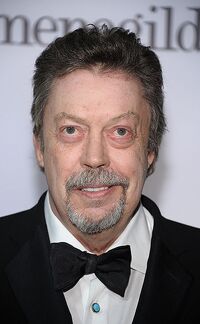 Timothy James "Tim" Curry is a British actor, singer, composer, and voice actor, who voiced the role of Emperor Doviculus in Brütal Legend.

Known for his work in film, theatre, and television production, Tim Curry is perhaps best known for his role as Dr. Frank-N-Furter in the 1975 cult film The Rocky Horror Picture Show.

He is also known for playing the Lord of Darkness in the film Legend, a role that inspired the character of Emperor Doviculus. Ronnie James Dio was originally considered to play Doviculus, but was replaced by Curry because he "was a better fit for the role". 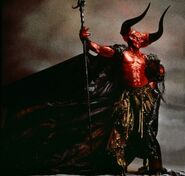 Tim Curry as the Lord of Darkness in Legend. 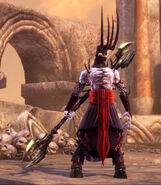 Tim Curry as Emperor Doviculus in Brütal Legend.
Add a photo to this gallery
Retrieved from "https://brutallegend.fandom.com/wiki/Tim_Curry?oldid=21222"
Community content is available under CC-BY-SA unless otherwise noted.