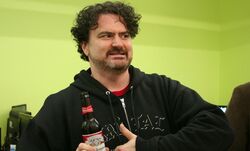 “Hey, if Activision liked it, then they should have put a ring on it. Oh great, now Beyoncé is going to sue me too.” — Tim Schafer

Tim Schafer is an American video game designer, known for his involvement in several critically praised adventure games with a strong focus on humour and storytelling. He is also the founder and head of Double Fine Productions, a game studio based in San Francisco, California.

He was involved in the development of games such as Full Throttle, Grim Fandango, Psychonauts, and Brütal Legend.

Add a photo to this gallery
Retrieved from "https://brutallegend.fandom.com/wiki/Tim_Schafer?oldid=26628"
Community content is available under CC-BY-SA unless otherwise noted.