The Zaulia are a band of warrior women who make their home in the Jungle. They ride the fierce fire-breathing Metal Beasts into battle, which only they can tame.

After the members of the Black Tear Rebellion drank from the Sea of Black Tears and went insane, they attempted to wipe out the Zaulia, but Riggnarok, the sole member of the Rebellion to resist the temptation of the Sea's power, sided against his former allies in defence of the Zaulia, leading them to victory over the Tear Drinkers. When they were overwhelmed in battle, they would unleash the Blood Vomit in the Altar of Blood.

They eventually join with Ironheade after discovering that its leader, Eddie Riggs, is the son of Riggnarok. They bring with them the Metal Beasts, which are added to Ironheade's growing army.

Apart from their leader and spokeswoman, Rima, the Zaulia nearly never speak - except for a few instances, after questioning them many times, and one directly, where one of them catches Eddie off-guard and scares him.

While the rest of the world reveres Riggnarok for forming the Rebellion which slew so many demons, and for resisting the Tears, the Zaulia venerate him for saving their race. 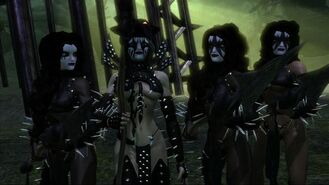 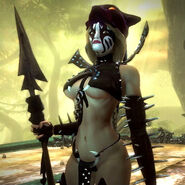 Add a photo to this gallery
Retrieved from "https://brutallegend.fandom.com/wiki/Zaulia?oldid=25867"
Community content is available under CC-BY-SA unless otherwise noted.